Plas Newydd & The Ladies of Llangollen 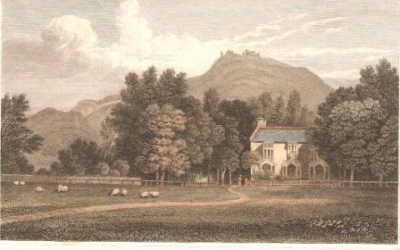 and their friend and housekeeper, Mary Carryl from 1780. Having found themselves in difficult situations

they decided the only way out of their problems was to leave their families in Ireland and look for a place where they could find peace.

They arrived in Llangollen in 1778 and moved to Plas Newydd in 1780, spending the rest of their lives devoting

themselves to self-improvement, farming and gardening as well as creating gothic style additions to their home

with oak carvings and stained glass.

They became legends in their own lifetime and received visits from many famous and cultured people.

The era of the Ladies ended with the death of Sarah Ponsonby in 1831. General Yorke owned the property

from 1876-1890, adding a west wing and the black and white half-timbered effect.

The Robertson family built an east wing for servants and planted the parterre and topiary c.1910.

Both wings were demolished in the 1960s, returning the house to almost its original size.

as seen through the eyes of the diary maids at Plas Newydd.

It is based on the letters and diaries of the Ladies and contemporary accounts of rural life in Wales. Available from Plas Newydd shop,

Courtyard Books, Castle Street and by post from Llangollen Museum