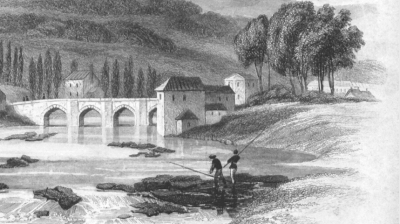 The Vale of Llangollen, with its gentle slopes and river Dee has attracted people for centuries.

The parish church, St Collen’s, is dedicated to Collen, an Irish-Welsh monk, who is supposed to have arrived

by coracle in the 6th or 7th century.

The attraction of this fertile valley was not lost on the Cistercian monks who established Valle Crucis Abbey in 1201.

Their influence was spread over a wide area, with farms and water-powered mills, and the abbey

became one of the wealthiest in the country until its dissolution in 1537.

The stone bridge, thought to have been built in 1345 ensured the town developed on both sides of the river.

The area was not always peaceful however and there was often conflict between the Welsh and the English.

Castell Dinas Brân was captured by both sides until it was burnt down, and even then it was seen as a strategic importance

as it was attacked by Owain Glyndŵr in 1402, although he failed to take it.