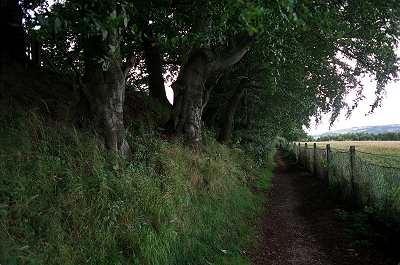 Offa’s Dyke is a linear earthwork, which more or less follows the Welsh/English boundary.

It consists of a ditch and rampart, originally about 27 metres across and 8 metres high

from the ditch bottom to the bank top.

and was probably built as a result of a border dispute, to keep out the Welsh. Offa’s Dyke Path

through the Welsh borderlands known as the Marches, taking in the spectacular landscapes

around Llangollen and the Eglwyseg Escarpment.

For about 70 miles the path follows the course of the Offa’s Dyke earthwork. Photo CPAT